2015 Federal Election: What If there is a three-way split?

2015 Federal Election: What If there is a three-way split?

We are going to vote on October 19.  It may be a three-way split between Conservatives, NDP and Liberal.

Which party will form the government then?  There is not a simple answer.

a discussion  on coalitions & accords. 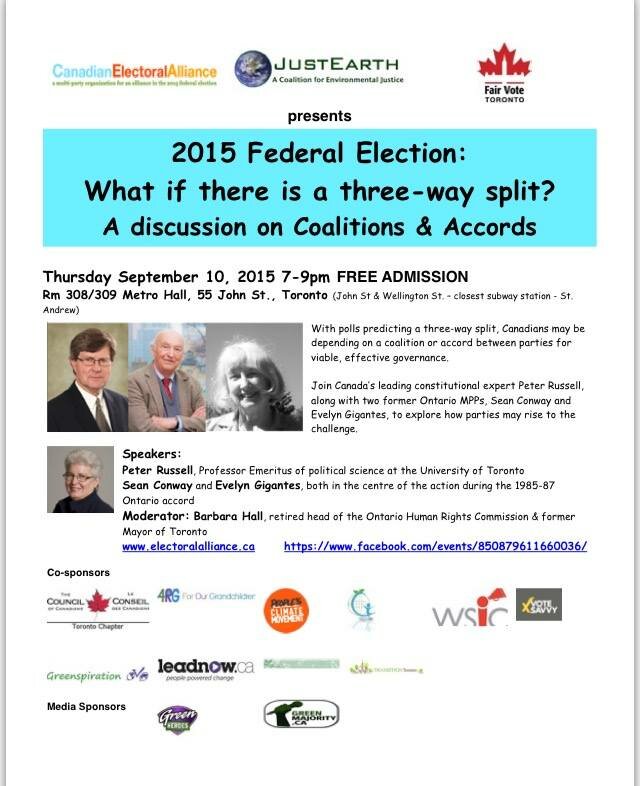 There will be questions from the audience.

Our event on coalitions & accords this Thursday September 10, 2015 is one of the big 3 on NOW!!! Share with your friends and invite them to this free event for more discussion!

Share this email about the What IF a three-way split: What happens next? town hall.

Print  the event flyer and post it on your local library, community centre, offices, schools and public bulletin boards on the streets.

Bring some friends with you to this event.

Canadian Electoral Alliance is a volunteer group. The organization sprang from informal discussions after the last federal election resulted in a Harper Conservative majority with less than 40% of the popular vote. The “60% majority” now sees cherished institutions wrecked, environmental measures long in place eliminated, money spent on prison building (although the crime rate is  falling), among them.

Our members include members of three political parties along with many with no party affiliation. People of any political persuasion are welcome. The goal is basic electoral reform, to make every vote count, to revitalize Canadian democracy.

If you haven't already done so, sign our declaration at http://electoralalliance.ca/content/electoral-alliance-declaration