"All three speakers at Thursday’s town hall ... agreed that minority government are better than majorities and they made the point with an engaging mix of facts, personal reflections and historical examples. Peter Russell reminded us that electors vote in not a government but a Parliament, then government takes shape from there. Many options are possible." Read the summary by Joyce Hall of Fair Vote Toronto & see more pictures 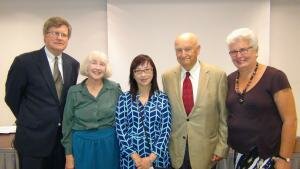 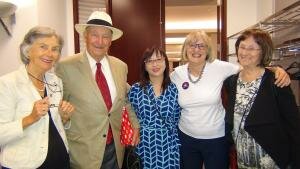 A group of people came together in 2011 after one political party formed a majority federal government with less than majority of votes - 40% of the votes generated more than 40% of the seats for one party in the House of Commons.  Since then, the current government lacks action on many important issues, including climate change & environmental policies.

Canadian Electoral Alliance linked the lack of climate action to lack of cooperation between political parties, and the deficiency of our first-past-the-post (FPTP) electoral system.  FPTP system does not generate a government that represents the majority of Canadians.  The 2011 federal election demonstrated that the current government only represents 40% of Canadian voters.

Canadian Electoral Alliance supports a change in electoral system to Proportional Representation, in particular Mixed Member Proportional (MMP), as recommended by the Law Commission of Canada.  This electoal system provides a proportional represenation in the House of Commons - if a party gets 40% of the votes, it gets 40% of the seats in the House of Common.  It encourages cross-party cooperation on deciding major issues that are important to Canadians.

Learn more About Us.

Check out these organizations in our Resources page:

Stay informed on our latest news!

Why are Canadians involved in politics so much?

Canadian Electoral Alliance is a volunteer-run group and your donation will be used to maintain the website, print flyers and coordinate town halls.  Your help is very much appreciated.

Cheques payable to "Electoral Alliance" can be mailed to

Please note that Canadian Electoral  Alliance is not registered as a charity and hence no tax receipt will be issued. Thank you for your support!

Comparison of U.S. and Canadian political attitudes toward online casinos